Wow it has been a while since I have written a blog post. Honestly the move has left me feeling pretty exhausted. I have had a lack of motivation to sit down and actually think about stringing words together into a coherent post. Well I finally have the motivation now, and for this post, I've decided to drift away from the outdoor adventure theme and talk about what it was like moving from Vancouver to Calgary with two little ones. Here goes....

Our life in Calgary has begun. Cam is working his new job and I am exploring Calgary with the girls. I can see how we will really start to enjoy it here but whenever I reminisce on our time in Vancouver, I feel a bit down that we had to move on. It was a bitter sweet move for us, as we had set down some solid roots in Vancouver and were really starting to feel settled. Four and a half years living somewhere is a long time!!!

Everything has felt a bit chaotic these past couple months. It started with packing up all our stuff over the last 2 weeks of January, then having the movers come and then driving 11 or 12 hours with the girls from Vancouver to Calgary at the end of the month. It was a heck of an adventure driving in the snow through the Rockies with two little ones, but overall the drive was very smooth. Somehow though, it never fails that the girls have to scream the last 15 minutes of each stretch of driving. Talk about heart wrenching/frustrating. 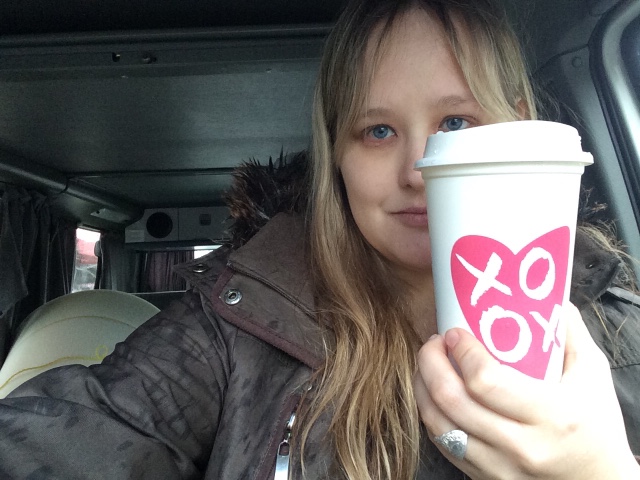 The morning of the move I woke up really needing some caffeine. The thought of opening a box, dirtying a dish and having to clean it was not appealing though, so I decided I would need to swing by a coffee shop. We had many different coffee shops around our area that we liked to frequent, but that morning I decided to keep it easy and head over to our local Starbucks while on my way to wash our VW camper to get it ready for storage. I was feeling a bit sad about the move and got talking with one of the baristas it as I placed my order. This particular barista knew me and the girls well, as I was a fairly regular customer and would often have brief conversations with her when I popped in. As I talked about how I was sad to be moving, she started to tear up and then cry. She gave me a big hug and grabbed this xoxo cup for me. That moment just reminded me of the closeness of the community at UBC that we lived in and what a special place it is. Not to mention that it was a really sweet gesture that pulled at my heartstrings too! 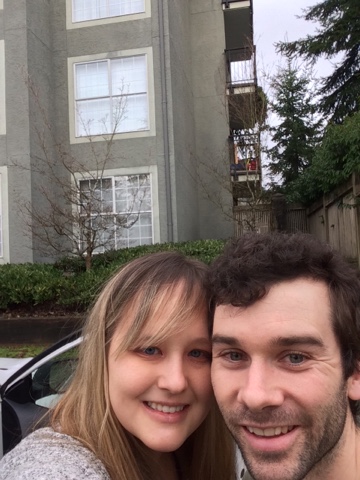 Washing our VW van for storage ended up taking two hours! It was a rainy day, so there wasn't much open for car washes besides this one place that we had found. This 2 hr van wash meant that we were behind schedule on everything. The above picture was the brief moment I had to say goodbye to our place. Exhausted and rushed, we quickly snapped a few photos. We were rushed because at this very moment the girls were overdue for a nap and the movers had just called to say they were waiting at the front of the apartment building.

The plan was for the kids to nap in the car as I drove the car to Chilliwack to stay the night at my sister's place. Cam was staying back to help the movers load up the truck. He was going to join us in Chilliwack later that evening. 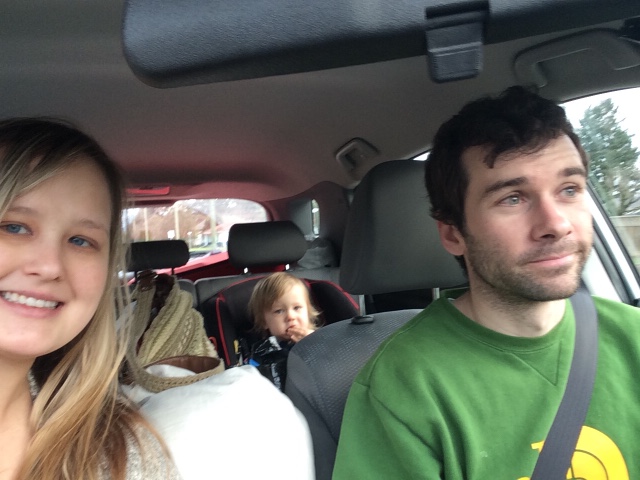 After staying the night at my sisters we started on the longest part of our trip to Calgary. Clear roads and skies shined on us. I started to think we might be able to do the whole journey, 11 hours, in one day. 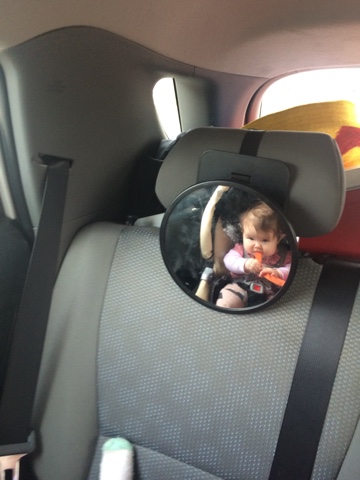 ..... Not long after I had that flash of optimism, we found ourselves at a complete stop in a blizzard around the Coquihala summit. I laugh now that the thought crossed my mind. Not only were we driving with kids which meant more stops and whining car rides but we were also driving in the winter through the mountains which meant sketchy roads and short days. Anyways, my thoughts quickly flipped from the best to worst case scenario and I started thinking that maybe we would be sleeping in our car that night. If only we had our trusty camper instead of our little car! I didn't have too much time to dwell on my worries though, because after about 30 minutes we found out that a tow truck had just finished moving a car and we were able to continue at turtle speed. 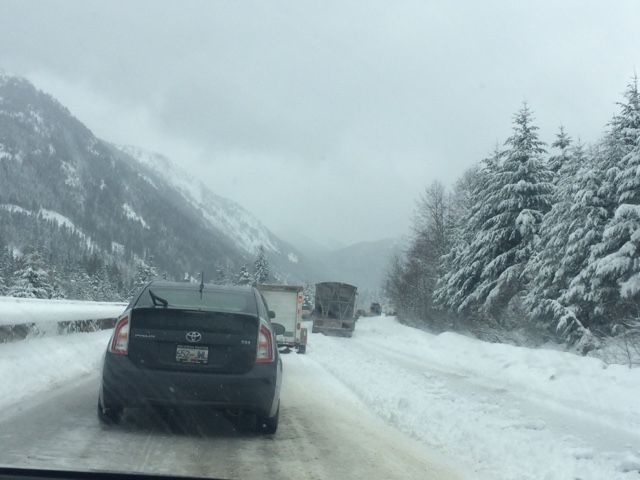 After another 30 minutes of driving, the roads cleared up completely and we were able to drive the speed limit for a good chunk of time. Our first stop was Merritt. We stopped there for gas and let Etta run around for a bit while I fed Julia. It was a short stop as we wanted to make it the 4 hours to Kamloops to have lunch.

In Kamloops we went to the Chapters so that Etta could look at some books while I had a coffee. It was great to have a place for her to walk around. Etta is a very active 2 year old and needed the activity over sitting in a restaurant for lunch. We ended up getting our lunch to go afterwards and just ate in the car. Another two hours of driving and we arrived in Revelstoke. Etta needed about 30 minutes to run around with Cam while I went to fill up the car with gas. It was around 4:00 pm and we had to decide whether we would drive another hour and a half to Golden. Since it was already late we knew that we would be driving in the dark. We decided to continue on with our trip to shorten the length of our trip the next day. The last part of our trip slowed down considerably as nighttime approached. I was relieved when we finally arrived in Golden, as the roads were becoming foggy and it was pitch black outside. My mama bear persona was starting to come out as I wanted to protect my girls and get off the road.

When we got into Golden we were starving and headed straight for dinner. We were so happy to have finished the longest part of our drive. We then took the girls to a hotel. I put Julia to bed while Cam took our energetic Etta for a swim. She came back from the swim with Cam and was nice and quiet as we did our bedtime routine. Her and Julia slept really well and woke up singing to each other across the room. 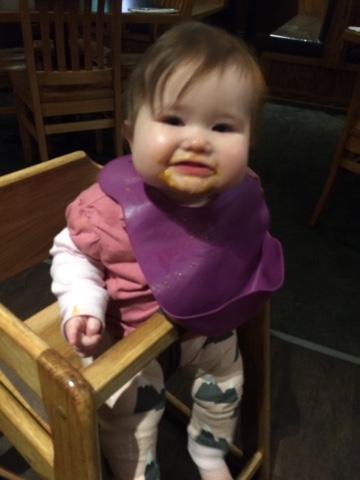 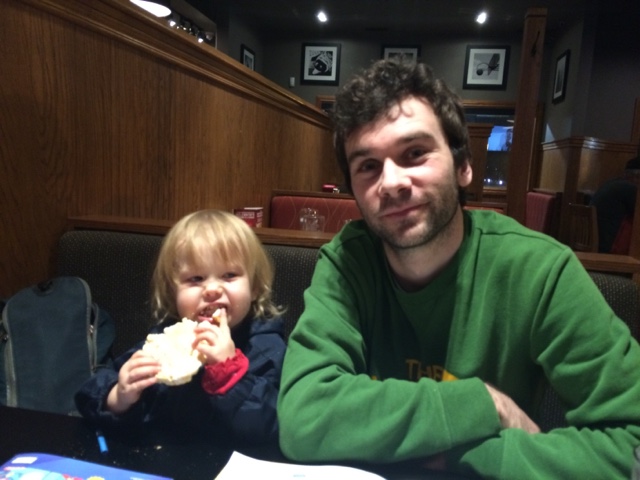 The next day we ate the complimentary breakfast and were on our way. We only had 3 hours to Calgary and we decided we were going to meet Cam's parents in Canmore. They were there skiing with the Regina Ski club. A short visit over lunch and we were off again to Calgary. The girls napped during the last stretch which meant a date drive for Cam and I! 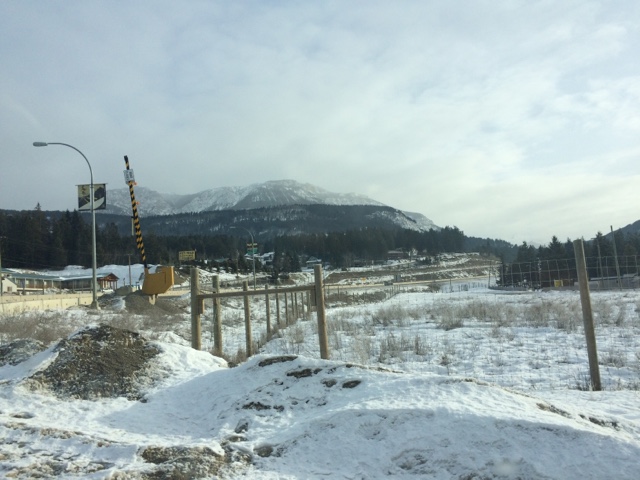 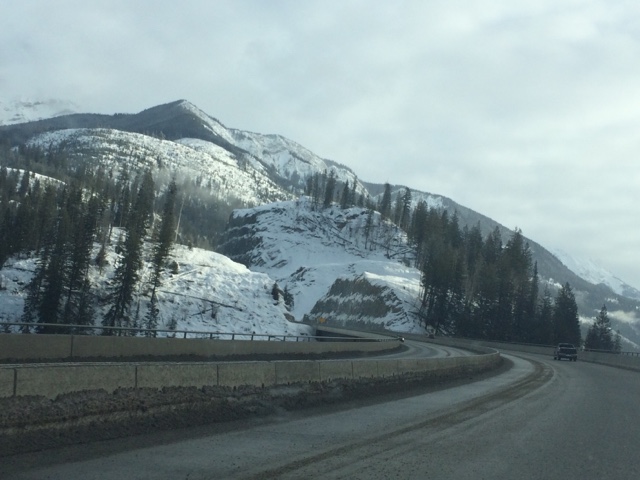 The girl's were still napping when we arrived in Calgary so we stopped by to take a quick picture of the new house before driving to my parents place, where we stayed the night. The next day the movers arrived at our new home and the chaos continued.

Honestly, our girls are amazing. The trip had its ups and downs but overall we had a great drive. I guess that is what adventuring with kids is really about. You can't expect things to go perfectly, but you enjoy it because you're doing it together - that goes for the exciting parts, the 'boring' parts and the extremely frustrating parts too. 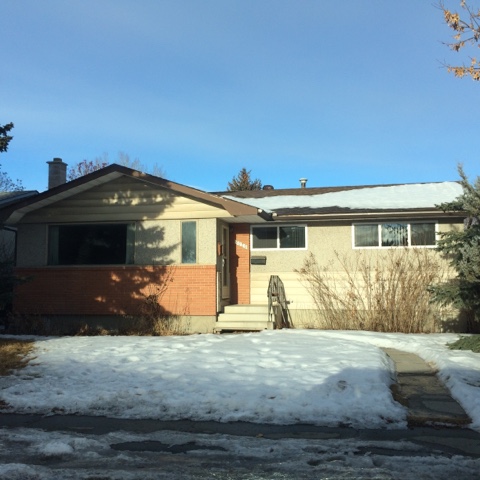